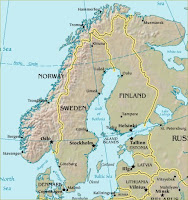 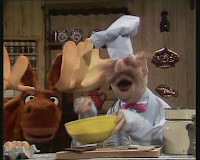 Tonight is the premiere of a little feature that I like to call the "Scandinavian Showcase." The land of fjords, smörgåsbord, trolls, IKEA, Bergman and that jerky chef from the Muppet Show has been a hot spot of interesting music as of late. This region, no stranger to the pop world, produced arguably the biggest group of the 1970s, ABBA. Love them or hate them, they existed and sold a gajillion records. In the 1990s, there was Ace of Base who were soon hailed as the biggest group since...well, since ABBA. Meh. Not even close and their Eurodance hits soon faded quick as did the groups stature. I've been following many groups over the years from Scandinavia, a region that includes Norway, Sweden, Finland, Iceland, Denmark and the Faroe Islands (Most of my stereotypes and both pop groups mentioned are, in fact, from Sweden.) I have amassed some of my favorites and will share with you kind readers throughout the ensuing days.

We begin with Iceland's Queen of Bizarre, Bjork. Below is her April 21 performance of her new song "Earth Intruders" on Saturday Night Live. "We are the earth intruders/ We are the earth intruders" something, something "AHHHHH" she eerily moans. More in common here with Robert Plant and another song about invaders, viking invaders to be specific, "Earth Intruders" has a detached, birds eye view of imminent destruction. Inspired by a dream Bjork had about the 2004 great tsunami, the primal drum beat, her colorful Valkyre choir/French horn section, her deadpan and bespectacled celesta player and menacing synth noises dying to escape from inside of those Macs create a swirling collage of noise appropriate for such a nightmare. Seemingly chaotic and reminiscient of veteran "no wavers" Suicide, this chaos, however, is under control suggesting the cold, mechanical rhythms of Kraftwerk. Those influences, however dark, are slighted as they are buried by svengali hip hop producer Timbaland's upbeat 80s chic production. Bjork's hypnotic siren-like voice and caged lioness strut have me convinced that people could dance to this. Maybe even having a good time while doing so. Who would have thought?

Posted by Culture Vulture at 7:37 PM