You're Gonna Miss Him When He's Gone: Roky Erickson 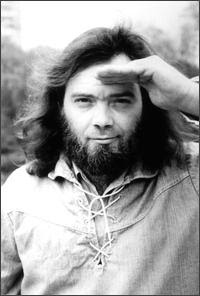 While everyone was wisely staying indoors on Sunday and keeping dry, I chose to do the opposite and brave the elements. If you had non-refundable tickets to go see a one of rock's most famous outsider artists, Roky Erickson, you'd take what Mother Nature was dishing out too. Roky Erickson began his signing career with the Texan garage/psychedelic (and electric jug pioneering) band, the 13th Floor Elevators. Roky soon emerged as the group's leader and penned both the group's (and what has become Roky's own) signature song, "You're Gonna Miss Me." Released in 1966, the song was only a modest hit and quickly faded into what seemed to be obscurity. That of course is never entirely true. Someone was listening and thank goodness for it. "You're Gonna Miss Me" was resurrected on the 1972 garage rock compilation, Nuggets, and has now become an underground garage rock classic. The song has also prophetically established Roky's sporadic, but nonetheless brilliant, solo career.

Life after the Elevators started rough. The group disbanded in early 1968 and Roky found himself a victim of the free wheeling drug culture of the era. He took too many LSD tabs and it soon caught up with him. In 1969, Roky was arrested for possession of a joint of marijuana and faced up to 10 years in prison. Roky pleaded insanity and was instead sent to a home for the criminally insane. Prison, in retrospect, may have been a wiser choice as he was exposed to electro-shock therapy and repeated doses of Thorazine for about three years. Upon his release, Roky's mental health had been severely damaged. A lifelong battle with mental illness would follow.

Still, Roky's desire to create new music did not fade. Releasing the single "Two-Headed Dog / Starry Eyes" in 1975, Roky's new music eschewed the psychedelic beast that were the 13th Floor Elevators with a more straightforward harder rock, apparent on "Two-Headed Dog" and an 50's rock nostalgia ("Starry Eyes") that made him sound like the second coming of Buddy Holly. Both songs are personal favorites of mine and they kicked off a career of songs about aliens, demons, ghost, the Bermuda Triangle, zombies, the occult, and the Evil One himself (Satan). To give you an idea, some sample lyrics from "Two-Headed Dog" (Two-Headed Dog, two-headed dog / I've been working for the Kremlin for a two-headed dog.) No clue what it means. Knowing Roky its probably meant to be taken literally. That was the case in 1982 when Roky signed a written statement that he no longer had control over his body as now a Martian had taken over it and was the Martian's property. And so began another relapse into insanity. Throughout this time, Roky never made a cent off his music even while his cult and legend grew. Today, Roky's situation has improved and has been taken into custody by his brother, Sumner, who is also a musician.

So how is he today musically? I'm not sure if he plays any new material. He might have played some Sunday, I am not sure considering I have not heard the entire Roky Erickson catalogue. Overall, I was very pleased. He played everything I wanted to hear, all his "hits," all his wonderful songs about aliens, zombies, two-headed dogs and Satan. The Explosives, his backing band, are pretty solid as well. Roky and his lead guitarist traded solos which ranged from awesome to pointless noodling. Some of the material leaned a little too heavy on the blues and I dunno, these days I'm not feeling that. But when he returned to his garage rock days, Roky was on point. I was expecting to see a bearded man with leaves and food stuck to his long flowing beard. That had been the image of Roky in previous years. Instead, when he came on stage at about a little after 10:00 PM, I saw a thinner man, still with long hair, but completely clean shaven and rocking a Hawaiian shirt with slacks. Well, he does turn 60 this year so why not? His voice also is still surprisingly strong and when he closed his first set with, appropriately, "You're Gonna Miss Me," Roky could still hit the primal yelps and screams that made the song an instant stand out to begin with. I admit I was also expecting to see a crazy man on stage say and do crazy things. Roky seems to have improved a whole lot. His guitarist and brother did a lot of the talking for him, but Roky looked in better spirits and when his lead guitarist said that Roky was going to sign autographs after the show, something that I've never seen happen at the Bowery or many other shows, I was compelled to stick around with friends and meet him face to face.

I waited online for the cheapest thing they were selling and bought a poster, one with Roky's mug on the front and electrical sockets on his forehead and electrical prods going in it with him smiling. I instantly liked it. The waiting did not take long and it was then that I noticed that the fan base was a relatively good mix of older and younger fans, although the older weighed out a little more. And, in fact, during the show, I would have the say the older fans, you know the ones who probably saw the 13th Floor Elevators during their glory years (for both the band and Baby Boomer fans), got into it pretty well. It's quite a sight to see a man pushing 60 jumping like a little school girl and another man, probably in his 50s, making devil horns and howling at Roky's guitar. Eh, so what, they were having fun.

When it was my turn to meet Roky, his brother was there talking with Roky and various fans. I soon recognized one of them. Rolling Stone veteran columnist David Fricke also braved the rain and stuck around to chat it up with Roky and his band. I knew it was Fricke because a.) he's a very tall man and b.) I recognized that shit eating grin on his face, the same one I see plastered next to reviews I am violently disagreeing with. Although, I have to honestly say I don't really mind Fricke. He's one of the better ones at Rolling Stone. Finally, I got up, handed my poster to Roky, and watched him sign it. There was something fragile about him on closer look, and he looked pretty spaced out. "Roky, you're a class act," I said, "Thanks." I shook his hand and he said "No man, thank you!" Quite a firm handshake he had there. I hope Roky is around for a long time and I hope that he puts out new music. Baby steps I suppose. My favorite part of the evening was during his encore when he played "I Walked with a Zombie." Derivative of the 50s rock Roky revived throughout a good part of his solo career, the song adds a doo wop element to it alongside the wonderfully surreal chorus "I walked with a Zombie / I walked with a Zombie last night." Only Roky Erickson could get away with writing a song about having a pleasant evening stroll with the undead. That's something to be thankful for from a truly American original.

Below you have two performances of "You're Gonna Miss Me." The first one is with the 13th Floor Elevators with the date unknown. The second features Roky as of 2007. Enjoy.

Posted by Culture Vulture at 11:17 PM