Praise for the Minutemen 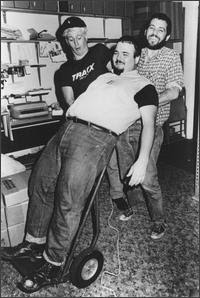 Beginning over the summer and stretching over in the fall of last year, I developed a fascination with the 33 1/3 music series. These pocket size books take on one seminal album after the other and have been for the most part have been excellent. There have been some occasional flops but overall the series is worth checking out. Considering I was constantly interviewing for jobs over the summer, they were also welcome subway reading. It had been a while before I read one but I just recently finished one on the Minutemen's classic double album, Double Nickels on the Dime. The task of shrinking down the massive album down to 106 pages was taken by Michael T. Fournier, a free lance writer (Pitchfork Media, Chunklet, Perfect Sounds Forever) and professor at Tufts University where he teaches a class on the history of punk rock, who did a masterful job of placing the Minutemen's music within context of their time, their influences, their influence on others then and now, and illustrating what truly talented individuals the late D. Boon, Mike Watt, and George Hurley were.

Watt, who has been the band's keeper of the flame, graciously provided much insight to the book's author as well as the 2005 documentary on the group, We Jam Econo. In fact, Watt will pretty much talk to anyone who will listen. The guy loves to talk. Not only about himself or the Minutemen, but about just about anything which has cemented his image as en elder statesmen of indie rock. Hurley seems to have taken a more low profile. D. Boon died on December 22, 1985 in a van accident which ended an already impressive career. Questions of "what if?" always arise when someone in their prime is cut down short. It was said that the Minutemen were on the verge of breaking out onto the mainstream. Many of their indie contemporaries, R.E.M., Sonic Youth, Hüsker Dü, and the Replacements, to name a few, found major label success. Fournier's portrait of the Minutemen is far more complicated than that. Here we see a group both incredibly distrustful of major record labels but also unafraid to do covers of mainstream rock acts like Creedence Clearwater Revival or Van Halen, a HUGE taboo in the world of hardcore punk. If anything, Fournier reminds us that the Minutemen may have started off under the guise of hardcore, but quickly evolved into something far different and remarkable.

As hardcore revealed to be a cultural cul-de-sac by the mid 80s, the Minutemen, along with Hüsker Dü & the Replacments (two other bands that used hardcore as a springboard) experimented with their sound and were unafraid to veer off the 3 chord path. Hüsker Dü retained the speed of hardcore but mixed it with a droning sonic wall of sound, sometimes poppy, sometimes dark, but always captivating. The Replacements ditched alcohol fueled hardcore rants for alcohol fueled power pop in the vein of Paul Westerberg hero, Alex Chilton. The Minutemen also retained the speed of hardcore but instead of wall of noise sonic textures, melded a sound that owed more to jazz as well as British post-punk bands like Gang of Four, Wire and the Pop Group. Certainly, the group's left-leaning, populist beliefs prominent in their lyrics owed a huge debt to these groups, but the Minutemen's sound favored a mixture of Marxist doctrine with a down to earth and common sense approach. Their socialism had a "human face" if you will. This was somewhat different to the consumer/product alienation expressed by Gang of Four, the ironic situationalism of Wire or the violent class warfare waged by the Pop Group. Simply put, the Minutemen, paid little attention the all the "isms" found on the political left and focused more on the actual meaning.

Fournier argues that if ever one wanted to see a perfect working example of socialism, you need not look further than the Minutemen. D. Boon's angular guitar never overshadowed Watt's driving bass just as Hurley's formidable drumming never looked to steal the show, rather all three musicians worked as a cohesive unit to "jam econo", as they liked to refer to it. The result perhaps did for punk what Sergei Eisenstein did for film in the name of socialist realism. But like all self-proclaimed socialist realists, the Minutemen were simply more interesting and smarter than the average Joe to pretend they were entirely of the people (as much as D. Boon liked to deny this). Nonetheless, their music very well could have brought a tear to Karl Marx's eye. Politics aside, the Minutemen's belief that anyone could make great art served as an ultimate testament of the DIY era and inspiration to musicians regardless of their political affiliations. "Our Band Could Be Your Life" they reminded us. Check out the Minutemen and if they grab you, read both the 33 1/3 on Double Nickels on the Dime and the documentary We Jam Econo. I leave you with two videos. First, of the Minutemen doing an acoustic version of "Corona" a tribute to the people of Latin America brutalized by right-wing regimes that has now found new life as the theme song to Jackass, a show that has nothing to do with revolutionary politics but everything to do with sadomasochism, and second, the SST official video for working man's anthem "This Ain't No Picnic." Enjoy.

"This Ain't No Picnic"

Posted by Culture Vulture at 7:52 PM