Song of the Day: "Making Time" by the Creation 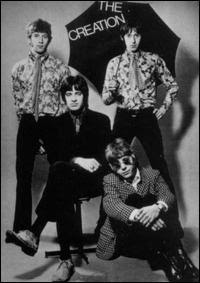 The sun might have set on Britain after the Second World War, but it quickly rose again between 1963-67 when Britain's youth culture strove to reconquer the world not with guns or soap ("cleanliness is next to godliness") but with ringing power chords, mop top hair cuts, mini skirts and mini beetles, and suave secret agents. All these were the hallmarks of "Cool Britannia" which would reach its apex in 1966. "Swingin'" London was riding high with musical stylings of rock acts like the Beatles, the Rolling Stones, the Kinks, the Yardbirds and the Who, as well as lighter acts like Dusty Springfield, Herman's Hermits, Petula Clark, Tom Jones and Lulu, all of these groups making some dent on the American market (not so much the Who yet but they would a year later with "Happy Jack.") Yes, it sure was good to be John Lennon or Paul McCartney, Mick Jagger or Keith Richards (don't forget Brian Jones!) or Ray Davies, or Peter Noonan. The bubble would burst for many of these acts a year later with the advent of psychedelia, hard rock and the "Summer of Love" forced the sunny, fun mod pop or Neo-Edwardian crooning of many of Britain's acts to conform or become irrelevant. Lesser known acts had no chance. Many, of course, would achieve greater fame. (I don't really have to tell you who do I?) But, if you were a band named the Creation, success never really got to you to begin with and you were already left out in the cold.

Perhaps no other British Invasion era band were so criminally overlooked as the Creation. Even other overlooked groups like the Zombies and Troggs had American hits. Big ones too! The Zombies boasted three: "She's Not There," "Tell Her No" and the posthumous hit in the wake of group's dissolution, "Time of the Season." The latter hit became popular enough to use it to sell tampons for Tampex commercial. I'm not sure that's what the Zombies had in mind with the lyrics, but hey, catchiest tampon commercial I've seen. The Troggs did better and scored a #1 single in 1966 with a cover of "Wild Thing" that is only rivaled by Hendrix's version (I like the Troggs version better) featuring, of all things, an Ocarina during the solo. In addition to "Wild Thing," they scored a top ten American hit two years later in early 1968 with the hippie dippie but still lovely "Love is All Around." The song has been bastardized by the terrible covers that have come since and the awful film, Love Actually. With its sour string orchestrations, the original version features a jagged guitar and metronomic rhythm absent from the lame adult contemporary versions that have followed. The Creation...oh yeah....they had no American hits. Why not? I have no idea. Don't feel guilty America, even their own countrymen ignored them as their only "hit" single "Making Time" peaked at a dismal #49. Pity.

I don't get it. "Making Time" had all the makings of a British Invasion era hit. Eddie Phillip's guitar was jagged and feedback heavy as anything Ray Davies or Pete Townshend came up with, perhaps even heavier. The songwriting was at its core, Beatlesesque, and singer Kenny Picket's voice was as rough as that of a young Mick Jagger. Well, the Germans loved them and the song peaked at #5 there. The Creation would get much love zee Germans as many of their other singles also did well there. Other potential candidates for hit songs included: the misanthrope's plight for understanding in "Through My Eyes," covers of Dylan's "Like a Rolling Stone" and "Hey Joe" (I like Hendrix's better,) the Mersey beat of "Try & Stop Me," the Batman theme influenced "Biff Bang Pow," the blue eyed soul of "If I Stay Too Long," and the art school frustrations of "Painter Man" featured Eddie Phillips playing his guitar like a cello way before Jimmy Page did. The different versions of the UK and US single for " How Does It Feel to Feel?" had their own unique character paving the way for the future of hard rock. The British version introduced a harder, metallic sound and the American version (slightly longer) saved room for some psychedelic freak outs for all those hippies out there. And still nothing! Not a crack in the charts on both sides. By the 1968, the band called it quits and its member working with more "who's who" in the rock scene (Pete Townshend asked Eddie Phillips to join the group as a second guitarist but Phillips declined.) Alas! The sun set on these noble contenders well before it did for the British Invasion. Not tragic enough for you all? Should I quote the final act of Hamlet to express this sorrow further?

"Making Time" is the closest they ever came to a hit on both sides of the pond and is is the song for the day. Wes Anderson, the savior of all things obscure, found it fitting to serve as the theme for the hit 1998 film, Rushmore. Anderson cited his reason for choosing the song because he believed it fit his maverick protagonist, Max Fischer's teenage angst very well. The Creation may have never conquered America or their homeland, but the songs blazing "out my way" attitude invaded the ears of a younger generation and the seeds were sown for another revolution awaiting to spring forth a decade later. Starts with a "P."

Posted by Culture Vulture at 7:47 PM