Song of the Day: "No More Heroes" by the Stranglers 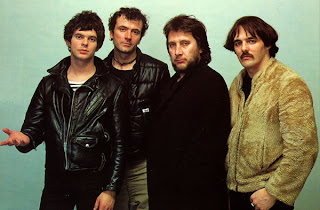 The Stranglers were the kind of band that made a career of latching onto trends and exploiting the hell out of them; quite often with varied results. Although their dangerous lunkhead image often suggested otherwise, the Stranglers were, in fact, accomplished musicians with backgrounds ranging from jazz, classical guitar and blues. In addition to having legit music talent, the Stranglers were great at displaying a wonderful understanding of the absurd with an off color (and often misinterpreted) sense of humor found in their lyrics. On stage, however, they reinvented themselves as rough and tough pub rockers oozing British working class sentiment. Both critics and fans knew better. So did the record producers as the Stranglers were later chosen to open for the Ramones first show in London. As a result, the Stranglers were swept up in the UK punk explosion of the late '70s. Their peers, and interestingly enough the Stranglers themselves , did not consider their music to be punk per se. But, their raw sound characterized by Jean Jacques Burnel's driving and, dare I say it, strangling bass, David Greenfield's eerie organ solos, Hugh Cornwell's nervous guitar and Jet Black's jazzy drumming fit in just fine with the punk rock ethos despite the fact that the band was also considerably older in age than most of the early punk rockers (Jet Black was pushing 40 at the time of the release of their first album.)

Recently, I combed through one the band's many greatest hits volumes and was appalled at how many awful songs they recorded after 1979. These guys embraced the New Romantic scene and never let go. Their later recordings boasted a softer approach with clean guitars, synthesizers and on key harmonies. So what's the problem? It's not what the Stranglers were about! This is a band that often refused to continue playing at their live shows unless girls from the audience got on stage and took their tops off, thus earning the ire and wrath of feminist groups. Contrast that now to their later work sounding like yuppie make-out music.*

At their finest, the Stranglers worked best with their first three albums (Rattus Norvegicus, No More Heroes & Black and White) and early singles. The song of the day goes to "No More Heroes" off the 1977 album of the same name. "Whatever happened to Leon Trotsky? He got an ice pick that made his ears burn," and so begins one of the Stranglers best songs. Comedian/free speech martyr Lenny Bruce, art forger Elmyr de Hory, and Don Quixote sidekick Sancho Panza are also name dropped as an unlikely batch of heroes. "Whatever happened to all the heroes? / All the Shakespearos?/ They watched their Rome burn" so says Hugh Cornwell. All of the best elements that made the Stranglers great: a driving melody, quirky bass and keyboards, and lyrics tinged with a black sense of humor are in full force. "No more heroes anymore / No more heroes anymore!" becomes the rallying cry. The song gained further relevance as it was released at the height of the first wave of punk, thumbing its nose at decadent, aging rock stars. After all, Joe Strummer said in 1977 "No Elvis, Beatles, or Rolling Stones!" No more heroes indeed.


*"Yuppie make-out music" is how Allmusic.com's Stephen Thomas Erlewine described Roxy Music's 1982 album, Avalon. I have shamelessly knicked it because I think it also applies to the Strangler's mid-80s work.
Posted by Culture Vulture at 9:26 PM