Being for the Benefit of Willie Mae

There is a little place I'd like to tell you all about, a slice of hipster heaven known as "the Silent Barn" aka "Raven's Den." The name of the place keeps changing but that doesn't matter. All you have to do is take the L train to Halsey St., take a left on Wykoff until you see a giant gray door next to a Spanish bar/restaurant and there you are. Once inside, you will be treated (or subjected) to some of Brooklyn's unknown musicians as well as non-Brooklyn and non-NYC bands/artists. If you're lucky, you may bump into some of well known faces in indiedom like Karen O of Yeah Yeah Yeah's, Greg Norton of Hüsker Dü, members of And You Will Know Us by the Trail of the Dead, and self-proclaimed "party guerrilla" and 8th wonder of the world, Andrew W.K. Mind you, I have not seen any of those hip cats when I've been there but, that is what I've been told. If rubbing elbows with the stars ain't your thing, stay for the music. Well known and hyped bands like Black Lips and most recently, Deerhunter, have chosen this extremely small, former office or residence (your guess is good as mine) to rock and/or roll at.

This past Saturday a friend and I decided to check out the evenings festivities. Apparently we stumbled in on a benefit show. Not exactly Live Aid, the benefit for Willie Mae Rock and Roll Summer Camp for Girls Benefit still radiated some of the same philanthropic zeal at heart. Most of the proceeds for the evening went to help fund the summer camp. I'll get more into the actual camp in a moment. First, the bands (all of these bands can be accessed on myspace.)

Remember the MC/clown your parents hired to entertain you and your friends for your 6th birthday party? Not me. I got a Krang (from TMNT) pinata instead. But, walking into the ultra-positive party dance punk of Totally Michael made me think of what I perhaps missed as a youth. There were dance offs, balloon games (one where the crowd had to pop as many as possible) and cheer leading disses set to original music programmed by this aspiring short shorts clad MC. Naturally, that is the charm of Totally Michael's act. "The best experience I've had is when a crowd of nearly 900 were with me and wholeheartedly participating" Totally Michael told me. "And the worst?" I asked. "Well, I once got ice thrown at me. But, honestly, that wasn't too bad because I was pretty hot and it cooled me off." Way to put a positive spin on everything! And after hearing his synth happy party music, you can't blame him. His genuine good nature and humor saves this dance party from being too ironic, a popular medium these days. I can't help thinking what's next though. A Totally Michael petting zoo? How about a Totally Michael moonwalk? Sky's the limit. Check out "Death Hill Over and Over" on his EP, For You.

Rasa Radiata followed. The post-punk influences were all there, XTC, Orange Juice to name a few, tinged with reggae. At points, however, the energy did not compliment the herky jerkiness of XTC and Orange Juice. Still, I am a sucker for that late 70s/early 80s sound. "Minutes Shine" could have very well been on Zenyatta Mondatta. It's no a swipe. I like the Police and Rasa Radiata have potential.

I was particularly fond of this next band. "No, it's Taigaa! With two "A's" G-Wolf, the singer for the band Taigaa! huffed while correcting my spelling. "It means 'Arctic Forrest' in Russian" added K.O.K.O, the band's multi-instrumentalist (violin & keyboard). Upon hearing their music, my friend and I thought of the eerie music from Castlevania. The composer(s) of the music for the wonderful video game series are the Ennio Morricone (s) of the video game world. Taigaa! mixes Old World sorrow (G-Wolf told me that their music stems from pre-WWII Korean pop music,) and self-described space punk with the goal to connect you to nature and "serenade" you with the past, as they put it. It's not all art-school whimsy. Get out of the way when G-Wolf blazes through the audience shaking her maracas and dancing wildly to Dusty Gold, the band's drummer, thwacking away on the skins.

San Francisco's Boyskout certainly take a cue from Patti Smith. The lead singer even kinda looks like her. Considering she spouts verbose lyrics similar to the punk legend's, it's not that hard to make such a distinction. I'm not alone. Mark Jenkins of the Washington Post agrees with me, only he throws in Blondie into the mix as well. So, do they do anything with these influences? "Spotlight" works well after hearing it on their myspace page. I don't remember them playing it live but they may well have. I did like their little violin ditty that they did but I'll be damned if I can remember the name. On record the guitars sound more angular. Live, some songs were distorted and indebted to grunge. I could be wrong. Major praise for the drummer. Fastest hands in the West.

And finally, High Places. This was the act my friend was waiting for. We all turned our attention from the center stage to left side of the room. Standing there were a duo, a guy and girl, a microphone stand and a turntable concoction. I have no clue exactly what Robert Barber, the guy, was playing except he beat his drum sticks to primitive beats while the singer, the girl, Mary Pearson, sang amidst some deafening loud feedback and a fleeting calypso rhythm that would disappear just as you began to make out the melody. The music High Places is no doubt reveling in all that is tribal and primitive, but they make no cultural absolutes in their lyrics or music. No celebration of the "noble savage" if you will. In fact, I really couldn't tell you exactly Mary Pearson was singing about since her vocals quickly melded with the tribal beats. Just as well. Who needs words when you have sticks?

So, what's the deal with the Willie Mae Rock Camp? That only depends on if you know who Willie Mae is. Question: Who invented Rock and Roll? Answer: "Willie Mae" is what Dusty Gold from Taigaa! told me. "What about Robert Johnson?" I asked. "No. Willie Mae" she insisted. I heard the name before but, I needed to be reminded who the original singer of "Hound Dog" was. Sorry, it wasn't Elvis Presley. Willie Mae "Big Mama" Thorton took the song to # 1 on the R & B charts three years before Elvis's version created a cultural sensation. Robert Johnson pre-dates both Willie Mae and Elvis by twenty something years but, that really isn't the point. The goal of the summer camp is to teach girls ages 8-18 how to rock. It should be noted also that half of the campers come from underprivileged backgrounds. The camp is a non-profit group and its more serious goal is helping young girls attain self-esteem through music as well as challenging gender stereotypes in music. As Mary Pearson, singer from High Places, griped before her set, too often she's heard people comment to her band mate that he made a wise move "hiring a female singer" to perform his songs. Perhaps the question that should have been asked, "How do you feel about the term 'all-girl' band?" Some perhaps would embrace the term and celebrate their so-called musical "otherness" in a traditionally male dominated genre. Other female artists might be indifferent to the term noting why doesn't a four-piece all guy band receive a similar label? And of course, other female artists might show complete disdain towards the term and perhaps even object to me using "female" as an adjective before the word "artist" or "band." They are artists. Simple. 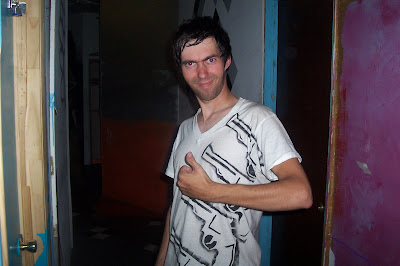 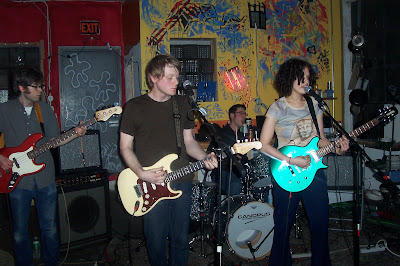 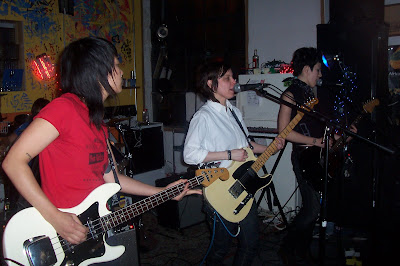 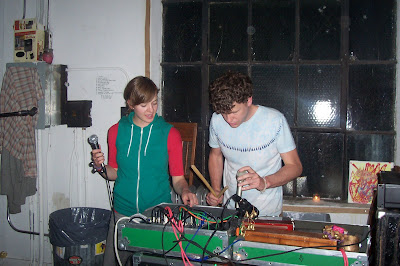