Dawn of the Century: It's Still the Ramones 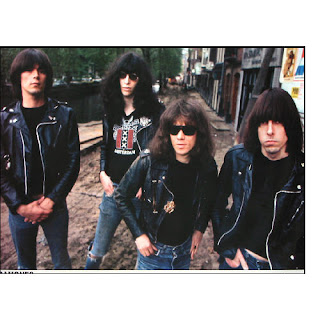 Give them credit. The Ramones gave us 20 years of "Gabba Gabba Hey" without ever really changing a damn thing. First punk band? Yes. Of course. I can hear it now "[H]old on a second! What about the MC5? What about the Stooges, man? No wait, you're forgetting the Velvet Underground and the New York Dolls! How can you leave out the Dolls? Jeez!" Did I hear the Sonics thrown in there somewhere? All viable candidates. In fact, without any of those bands the Ramones may have never existed. The New York Dolls, Stooges and MC5 harnessed the raw power of rock and roll and helped create punk before there was even a term for it. Yet, the Ramones took these elements and perfected the template, the blueprint for what would become the textbook definition (if their is such a thing) of punk rock: 3-4 chords, fast speed, silly lyrics, celebration of camp and kitsch, and lots of bratty attitude. You can hear a love of bubblegum pop, girl groups, Phil Spector, and the early days of rock and roll layered within all that simplicity.

"Hey! Ho! Let's Go!" were not just the first words off their 1976 self-titled debut, they were a rallying cry. Them words were fightin' words. The enemy? Bloated 70s rock, dinosaur rock, prog-rock, easy listening feel-so-good singer-songwriters...take your pick. One of my favorite parts in the 2004 documentary, End of the Century: The Story of the Ramones, is a video of Keith Emerson stabbing his keyboard like a madman and flinging it against the giant speakers surrounding him. Smoke begins to arise. And as if once was not enough, he attacks the keyboard again. Cut to now Johnny Ramone's head shaking, disapprovingly, "that's not rock and roll." For the sake of this post and the Ramones, I'll agree to that. Rock and roll, at least in the eyes of the Ramones, was supposed to be short, fun and fast. Whatever Keith Emerson was doing, that's not what rock and roll should be. Now, I realize that virtuosos don't have to be the villains these days. Playing your instrument well should be a virtue, ideally. That said, I really fucking hate Emerson, Lake and Palmer. The dividing lines were drawn. On one camp, you had Seventies "Rawk." The other...er..well yeah, the musical "other" that would be known as punk. This is an oversimplification naturally, but I would like to bet that is how the Ramones viewed it.

Armed now with a vision and all clad in leather, Joey, Johnny, Dee Dee, Tommy (and let's not forget Marky, Ritchie and CJ) set out to "Blitzkrieg Bop" their way out of CBGB's and onto the open road. Along with fellow New York punk rockers like Patti Smith, Richard Hell and Television, the Ramones helped lead the vanguard of the first wave of punk. Often they played to indifferent crowds. Their detractors threw bottles. Their admirers formed bands. Within time, the seeds of punk germinated outside of New York City with bands forming in Los Angeles (Black Flag, X, the Germs,) San Francisco (Dead Kennedys, the Avengers,) Minneapolis (Hüsker Dü, the Replacements,) DC (Bad Brains, Minor Threat) New Jersey (Misfits), and across the pond, London (Sex Pistols, the Clash, the Damned,) all bands that owed some debt to the Ramones simple power chord formula. When the dust cleared and sonic onslaught was over, the Ramones rose as heroes. They came, they saw, they conquered.

Unfortunately, for most of their career they were unsung heroes, due to indifference of of the mainstream press, radio stations and audiences. They were most unappreciated in the US where often they were reduced to played small clubs. Elsewhere, they could cause mass hysteria among the disenfranchised youth of the world. This is an all too common tale with many revolutionaries. Too make matters worse, like most revolutions, punk devoured itself and became self-parody by 1978. Seems that some in the record companies were listening and thinking up fun ideas on how to capitalize on the new music scene. Enter new wave. Among their own kind, frustrated punks broke ranks and experimented beyond the 3 chord format. Enter post-punk. A second wave of punks burst in the US but they had very little in common with the leather jackets, mohawks, safety pins and bands from the first wave of punk. Their music was much harder, faster and violent verging on pure noise. Enter hardcore. Internal squabbling would hit the Ramones themselves. Tommy would quit playing the drums and decide to focus as a producer. And then there was the whole "KKK took my baby away" thing. Johnny stole Joey's girl or was it that she was never Joey's girl to begin with? Depends on whose side of the story you believed. The thin facade of unity, so present on all of their album covers, cracked. You could swear that they were all the same and related somehow. Not entirely true. Contrast Joey's left-wing feel goodisms with Johnny's right-wing glower power, Dee Dee's lunkhead charm vs. Tommy's calm, collective manner (again, let's not forget Marky, Ritchie and CJ.) What they had in common was that they were social misfits with a similar love of the same music that brought them together in the first place. But, even that had to end. They finally called it quits in 1996 after famously promising to disband if their last album, Adios Amigos, did not become a hit. It was a flop. Although this was not a total surprise, the commercial tidal of wave of grunge and alternative rock of the 90s, also owing a debt to the Ramones, should have allowed them to finally score an official hit album.

Time heals all wounds. In 2002, the band was inducted into the Rock and Roll Hall of Fame minus Joey (who died a year earlier of lymphoma.) On that stage, the Ramones were briefly reunited, finally validated by the establishment. How very un-punk. Still, it was a very much deserved praise that was long overdue. A couple of months later, Dee Dee died of a drug overdose. Two years after that, Johnny succumbed to cancer. Only Tommy remains from the original line up (once more, let's not forget Marky, Ritchie, and CJ.) The Ramones now show up on all sorts of "greatest" lists in magazines and TV specials concerning rock and punk. "Blitzkrieg Bop," "Beat on the Brat," "Judy is a Punk," "Rockaway Beach," "Sheena is a Punk Rocker," "I Want to be Sedated" have been recently admitted into the great American songbook as classics. I'm a fan of the later singles as well, "The KKK Took My Baby Away," "Rock and Roll High School," the Reagan baiting "Bonzo Goes to Bitburg," "Warthog," "Somebody Put Something in My Drink," "Pet Sementary," and the fun Tom Waits cover "I Don't Want to Grow Up." Whatever your favorite, the Ramones influence cannot be denied. I realize I am being very formalist, but within the realm of punk and popular music, this is a truth that must be recognized. After recently viewing End of the Century, I realized how it easy it is and was to take the Ramones for granted. Certainly early heroes of mine, the Ramones disbanded before I could really grasp their influence and see them live. Part of their appeal was their familiarity. There was something very refreshing to know that as music trends came and went, there was always the Ramones. Familiarity was their weapon of choice. Future bands will continue to be influenced or steal from them. This is only fitting considering our own disposable pop culture. After all, the Ramones celebrated that, at least on the surface. The Ramones, however, really aren't disposable. Their music is what we should be sending to the aliens. I'd like to think at some point, as the new century stretches out, the opening strands of "Blitzkrieg Bop" will continue to blast through the infinity of space and along the course, influence anyone or anything out there willing to listen.


Below is a video of the Ramones performing "Rockaway Beach" on MusikLaden, a German music TV show. Marky Ramone is on drums by this point.

Posted by Culture Vulture at 8:12 PM