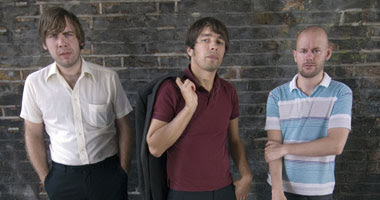 Think that whistling in a pop song is pretty much dead? Think again. Peter Bjorn and John have made pursing your lips together hip and relevant once more. These Swedish pop smiths are coming after hand claps and "sha-la-la's" next. "Young Folks" is by far one of the prettiest and catchiest singles to have been released within the past few years and it gained further distinction as being the unofficial summer song of 2006, at least in the indie world. "Young Folks" has my vote over "Crazy" by Gnarls Barkley any day. That brings me to my next point. There is no reason why "Young Folks" could not be a massive worldwide hit, although it "Young Folks" has already been snatched up by the corporate movers and shakers (it has been featured in commercials for AT&T, Banana Republic, and will be used to help relaunch Napster.) Fine. But, why isn't it being played on the radio? Why do I need "Young Folks" to persuade me to change my phone service? I want it on the radio and I want it now! Their third album, Writer's Block, in fact, has several candidates for international smash singles: the whistle dance groove of "Amsterdam" and ringing guitar heavy "Detects on my Affection," to name a few, with the latter also being featured in a car commercial.

Peter Bjorn and John began life as power popsters but since their last two albums, have now chosen to swap Alex Chilton and Nick Lowe for Phil Spector and Burt Bacharach as a source of divine inspiration. The arrangements on "Young Folks," as well as Writer's Block, result in some of the most impressive usage of Spector's "wall of sound" during the album's louder moments and the tales of heartbroken star crossed lovers balanced with the uplifting portraits of dreamers are worthy of comparison to any Bacharach/David collaboration during the album's quiet moments. Make no mistake, Peter Bjorn and John are no rehashers. They take their influences rooted in 60s baroque pop and 70s power pop and push forward with a modern sound that belongs to today as well as the future. "Young Folks" already proves its timeless factor. The "so-into-you" lovers from the song affirm that they simply don't care about the "young folks talking about the young style." They would also like to add that they "don't care about the old folks talking about the old style too." "All we care about is talking, only me and you" they conclude. These sunny, carefree lines are sung so convincingly by Peter (or is it Bjorn?) and guest vocalist Victoria Bergsman of fellow Swedish band, the Concretes, that I'm ready to make it my summer song for 2007 and the summers yet to come.

Posted by Culture Vulture at 8:02 PM