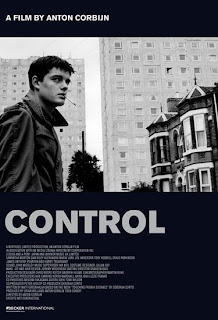 Who would have thought that a film about a tortured, budding rock star dying too young shot all in black and white would have cleaned up at Cannes? Wait a minute...but seriously, Anton Corbijn's biopic about Joy Division lead singer Ian Curtis is admittingly the only biopic that I am interested in seeing. The obvious reason me being a fan of Joy Division, but also Corbijn actually knew Curtis on a personal basis. Joy Division were one of the first acts he photographed. Moving on from the music video format, the band, specifically Curtis, are the subject of his first feature film, Control. A fitting title, control is something Curtis obsessed about: his lyrics, women, and tortured artist role. He struggled to maintain his hidden persona against his everyday, mundane life against the backdrop of post-industrial Manchester. Below is a first look at Control.

Posted by Culture Vulture at 6:09 PM