Song of the Day: "Immigrant Punk" by Gogol Bordello 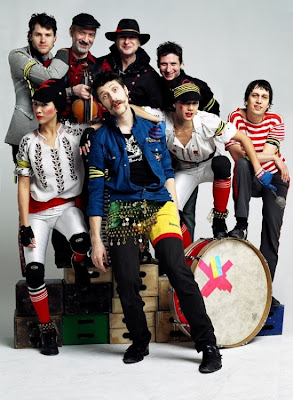 Whole lotta talk about immigration these days. Of course there is. We've got a presidential election just round the corner and from now till November 2008 will we be bombarded with candidates positions on immigration ranging from "Knock on the front door because the back door's closed!" to "Come on in!" from various politicians. I for one want to know what Gogol Bordello frontman and mastermind, Eugene Hütz has to say about the issue. An immigrant himself (from the "Old Country," Ukraine to be exact) Hütz's band is perhaps one of the more original and wild Brooklyn based bands. Self-described "gypsy punks," Gogol Bordello is the bastard son of Eastern European folk music of the Roma (the term we should probably use as opposed to "gypsy"), dark cabaret, and Pogues, Clash and Stooges influenced punk rock.

All of the members of Gogol Bordello are pretty much Eastern European immigrants themselves and this creates a crucial dynamic to their sound. Outcasts in their own country, "punk mafia" in this country, Gogol Bordello lay in the darkest corners of the margins. So does the unnamed immigrant in the song "Immigrant Punk" of their sophomore album, Gypsy Punks Underdog World Strike, lamenting:

It's tough out there. But then, with rejection comes acceptance and outright defiance:

"Despite the living up in USA
I'm still holding up in all my ways
I gotta friends, we gotta band
We still make sound you can't stand"

Not an easy assimilation as one may imagine. Hütz's advice, "Legalize Me! Realize Me! Party!" Not a bad party slogan. An even better song. Boasting a rollicking dance hall reggae groove, "Immigrant Punk" is a direct invitation from the Bordello to come dance and sing-a-long with them on the margins. Globalization will destroy rigid national identity, and the amorphous blob of clashing cultures that is Gogol Bordello couldn't be happier.

Posted by Culture Vulture at 8:09 PM