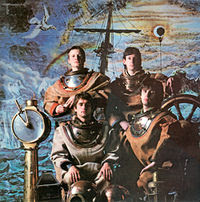 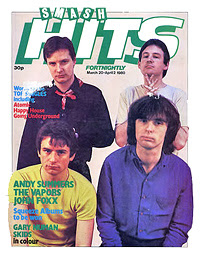 Perhaps one of XTC's greatest singles, at least the ones released in the UK, "Respectable Street" launched the band headfirst into ground already paved by Ray Davies, minus the musical throwback to British dance hall, British folk, and chamber music. Oh, sure, the song starts with a scratchy Victrola, like something coming out of late Victorian and Edwardian England, or The Village Green Preservation Society, but the rest is pure XTC (no pun intended): loud drums, energetic jerky vocals and guitars, witty lyrics. The songwriting duo that was Alan Partridge and Colin Moulding made XTC one of the stand out bands of the whole British punk and new wave explosion and into the respected art-pop we all know and love. "Respectable Street," a Partridge number, showcased the band's satirical side as they took on social ills affecting British society, all the while never losing their sense of humor:

From then on, the rigid British class system and the snobbery it breeds, abortion, sex positions, gardening, all become targets. "Respectable Street" foreshadowed XTC's foray into more British themed, as well as mature songwriting, would lose some early fans, especially with albums like Skylarking because of its polished studio sound and Sgt. Pepper tendencies. "Respectable Street,"off the album Black Sea, combined the new lyrical direction with their high energy sound. One of their best. Don't worry, I'll get to "Science Friction," "Making Plans for Nigel" & "Senses Working Overtime" soon enough.

Posted by Culture Vulture at 10:52 PM