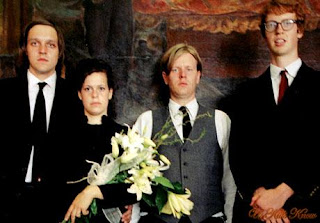 I hope I say this first before Pitchfork, AllMusic, Rolling Stone etc. all do. (Antichrist Television Blues) off Neon Bible (out sometime in March) owes a considerable debt to Springsteen. In fact, this song would have fit comfortably on some of the Boss's darker albums, Darkness on the Edge of Town & Nebraska, being the first to come to mind. Maybe even as a darker number on The River or Born in the USA.

Win Butler's singing voice mimics Springsteen's as well as his strumming (guitar style. Its a frantic, paranoid little number laced with subtle orchestration, soft and high-pitched harmonies, and the occasional chimes from a distant piano. 9/11 imagery (Don't wanna work in a building downtown/Cause the planes keep crashing always two by two), Christian righteousness (Dear God, I'm a good Christian man/I'm your boy, I know you understand) & millenial desires (Wanna see the cities rust/And the troublemakers ridin' on the back of the bus) color the speaker's thoughts. Springsteen's anti-heroes from songs like "Atlantic City", "State Trooper" and the title track off Nebraska share the same panic & working class fatalism that the speaker in "Antichrist Television Blues" holds. After all, the speaker asks us and the unknown "little girl" where she (and us) was at his age. "I was workin' downtown for the minimum wage!" is his angry reply.

Resentment and renewal are prevalent in much of Springsteen's work. The speaker in "Atlantic City" promises his wife that all will be better once he does what he has to do, even if it means working with the criminal underworld. The fatalist cycle remains unbroken in a song like "Adam Raised a Cain"(You're born into this life paying/For the sins of somebody else's past). Butler's protagonist has, no doubt, been wandering the same darker landscapes in Springsteen's America, also filled with resentment for not seeing the full potential of a better life and calling for a renewal, but, in the form a new Messiah (Dear God, will you send me a child?)

Oh God, will you send me a child?
'cause I wanna put it up on the tv screen
So the world can see what your true Word means
Lord, won't you send me a sign?
'cause I just gotta know if I'm wastin' my time

Desperation is a powerful motivator and the speaker suddenly transforms into a prophet (Tell me what to say/ I'll be your mouthpiece). And just who is this "little girl" he keeps talking to? "Oh my little bird in a cage / I need you to get up for me up on that stage/Show all the men that you're old for your age" reads like a call for hyper pro-creation, perhaps being forced upon. He tells her to "Show the men it's not about the money/Want to hold a mirror up to the world." The speaker has now turned his inward anger on her and the decaying urban world around him. An urgent righteousness drives through him and despite showing brief moments of uncertainty, he soldiers on, like any good Christian patriot.

The Arcade Fire drive the song as both a militaristic Protestant hymn, with its highs, into a absolute frenzy of fire and brimstone and as an ambiguous ballad, with its lows, concerned with redemption and salvation. It is a curious mix as in my head I hear Jerry Falwell's callous comments blaming 9/11 on homosexuals & secular humanists contrast with Clive Owen's jaded face transforming into one of hope in the recent dystopian film Children of Men. These are the concerns of our times everyday flashed on HDTV filtered here in a pop song. And just when I am starting to put it all together, it ends, abruptly: (Threw me a kid, God, throw me a knife/So tell me Lord am I the Antichrist?)

The Montreal octet (I think there are 8 now) wowed us all with their 2004 debut Funeral, an album that masterfully combined an inward looking passion with a big and all encompassing sound, another characteristic they share with Springsteen. Whereas that album, however, dealt with death on a smaller and personal level, the Arcade Fire now strive for more ambitious and bigger concerns (religion, 9/11, terrorism, war etc). (Antichrist Television Blues), just one of the many songs on the album that carries this overall theme, stands out as a must hear. I make the comparison to Springsteen not to take away from the band's talents. On the contrary, I make it in effort to convince those with any doubts that the Arcade Fire are becoming a very good and important band.

Posted by Culture Vulture at 8:30 PM