The Filth and the Fury!

On December 1, 1976, the Sex Pistols were called in as last minute replacements for Queen to appear on the popular Today show with veteran British TV personality Bill Grundy. Both the band and Grundy were severely intoxicated. The interview was a disaster. Asking if Mozart, Bach, or Beethoven were influences on the band, a sarcastic Johnny Rotten rolled his eyes, "Yeah they really turn us on" and muttered the word "shit." Grundy knowing exactly what the band was doing decided to provoke them and ask Rotten to repeat the word. He did. Grundy, again being very drunk, decided to hit on a then 19 year old Siouxsie Sioux, "I always wanted to meet you" she joked. Grundy probably had no idea whether she was serious or kidding and invited her to chat after the show. An amused Steve Jones proceeded to call Grundy a "dirty old man" which in turn had Grundy further goad the band, "say something outrageous." Jones happily continued calling Grundy a "dirty bastard" and a "fucking rotter." The broadcast ended shortly. The following day, the British papers slammed the words "The Filth & the Fury" on their headlines. Parents were outraged that their children were exposed to obscene language during dinner time. It ruined Grundy's career. It launched the Sex Pistols. 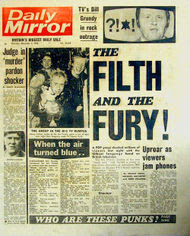 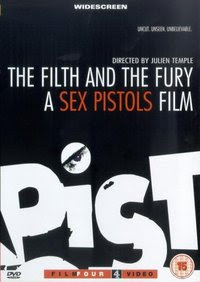 And now, the documentary of the same name. The Filth & the Fury does the band justice as it tells their story from their perspective. We never actually see the band members or their estranged and controversial manager Malcolm McLaren. Instead, we see their shadowy figures during the interview segments. It reminded me of watching someone in the witness protection agency. Perhaps it alludes the bands perceived criminal element. Julian Temple tried once before telling the band's story but it was in the aftermath of their breakup and was very much steered in McLaren's direction. The film does not stray from your basic rise and fall story chronicling the bands humble beginnings to their disintegration at the Winterland Ballroom in January 1978, but when contrasted with Temple's excellent use of stock footage of 70s strife in Britain (garbage, lorry & grave digger strikes, fuel shortages, race riots),Queen Elizabeth's Silver Jubilee, footage of Roxy Music, Bowie and T. Rex on Top of the Pops, the sketchy characters who hung around Malcolm McLaren's SEX shop, and scenes from Olivier's Richard III, the documentary succeeds in placing the band within the context of the times as well as establishing their legacy. And, any documentary that has John Lydon choking up over the death of Sid Vicious is worth viewing for that rarity alone. Speaking of Vicious, we get plenty of him through a 1978 interview of him telling his side of the story. It's a great documentary about a great band. The detractors like to point out they only had one album and they couldn't really play: A.) They could play. Only Vicious was incompetent. B.) Who the fuck cares? I mean, wasn't that the whole point of punk rock? To be an alternative to boring dinosaur rock? Steve Jones tells us that he used to think musicians dropped from the sky. And then came the Sex Pistols who showed that anyone could have a stab, for better or for worse mind you. There was, however, something liberating in knowing that you could make it up as you were going along. Not interested? Well, isn't there a Zepplin DVD you should be getting stoned to?
Posted by Culture Vulture at 9:07 AM