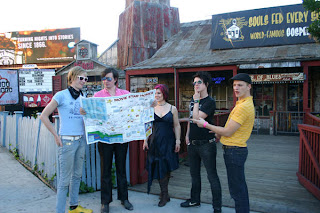 Look at them! They formed a band. And, a damn good one. I didn't really get Art Brut the first time I heard them. It began to come together at last year's Sirenfest where they were for me the highlight. Last week, I became a full believer. Bang Bang Rock and Roll has become one of my favorite albums of the decade. The Brut's tactics are deceptively simple serving as both a deconstruction of rock and roll clichés and unabashed celebration of them.

"Art Brut are you ready?" asked frontman Eddie Argos. Actually, it was more like an order. There is no question that Argos is the ringleader of the circus that is Art Brut. Armed with British witticisms and boyish energy, Argos, along with the National's Matt Berniger, has restored the lost art of the frontman. But, without a solid band backing him, he would just be a clown. On record, the band is mid-tempo Britpop. Live, they are fast paced punk all the way recalling the campier moments of the Damned. You can thank the twin guitar work of Duran Duran hairstyled Ian Catskilkin (lead guitar) and the ascot wearing Jasper Future (rhythm guitar, backing vocals.) Although not quite the dualing guitar work of Television's Tom Verlaine and Richard Lloyd, Catsklkin & Future have more in common with the the MC5's Wayne Kramer and Fred "Sonic" Smith. This is certainly the case live. Don't forget the rhythm section, the multi-colored Freddy Feedback (bass guitar) and Mikey Breyer (drums.) With Argos's one man standup routine, the dual guitar attack of Catskilkin and Future, Feedback as anchor and Breyer playing his drums like a dancing chimpanzee they are formidable. I mean that literally. During "St. Pauli," off the new album, Argos, spinning like a whirling Dervish bumrushed the crowd with the intention of keeping us on our toes. "Lousy defence (British spelling)" he quipped. After all, this is a band that believes in the power of rock and roll as much as they enjoy deconstructing its conventions and excess.

For Argos, some rock conventions are sacred. A recent trip to a supposedly small and independently owned record store in NYC annoyed Argos after seeing racks of DVD's and video games alongside albums. He expected that sort of thing at Virgin Megastore, but not the Village. "I don't want DVD's or video games sold in my record stores!" he bellowed to the sound of applause. If the vanishing record shop has alarmed the Brut, so have the complacent crowds at rock shows. There is room for the polite spectator just enjoying an evening at the opera. The crowd is a part of the whole experience. Perhaps not so much a religious experience, instead a musical circus. "Art Brut, Top of the Pops" the kids shouted after their first set. After fifteen minutes of foots pounding the Highline Ballroom's shiny new floor, chants, beer cans flying, the Brut came out. "Art Brut are you ready?" Argos again commanded. In this regard, the Brut are reactionaries longing for a day when rock stars did not have to take themselves so seriously and could be rich, famous and only that. Think A Hard Day's Night reved up at punk speed.

Past songs like "Bang Bang Rock and Roll" reduced rock to its primal origins eschewing pretension"I can't stand the sound of the Velvet Underground!" as sang in the title song or "We're going to write the song that makes Israel and Palestine get along" in "Formed a Band." Away with Lou Reed and Bono. Or so they say. Being deconstructionists, Art Brut never give us a straight answer. It's a Big Complicated is not just the title of their sophomore effort, it's the mantra. Songs like "Pump Up the Volume" and dance club ode "Direct Hit" further examine Argos's obsession with the purity of pop music. Being 27 years old, however, complicates his seemingly eternal adolescence as evident on tracks like "Nag Nag Nag Nag" and ("not a cover" Argos said to the audience) "I Will Survive." "Jealous Guy" (also not a cover) examines the fear of a declining male sex drive building on the impotence drama of "Rusted Guns of Milan" from their debut. The theme of this older and wiser Art Brut is that getting older is a bitch, but then again, it's a bit more complicated than that isn't it? Named after the term for "outsider art" of the insane as credited to art critic Roger Cardinal, Art Brut are indeed outsiders in the pop game. The genius of their art, however, is their focus on the comedy that is life. They are too lighthearted to take themselves seriously. And when they are serious, it's only for their genuine love of pop music. Sometimes, that is enough. Kind of think of it, maybe it's not so complicated after all.

Posted by Culture Vulture at 5:56 PM